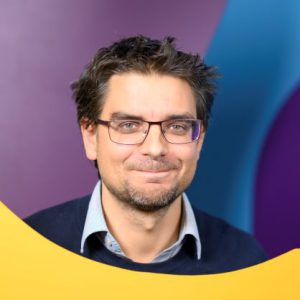 Gijs studied Theoretical Physics and Mathematics at Utrecht University. For his master’s thesis, he investigated the relationship between super-membranes and matrix models in string theory.

Thereafter, he did a PhD in Particle Physics at the Radboud University Nijmegen and Nikhef, during which he developed Monte Carlo simulations for weak boson scattering in Higgsless models at the Large Hadron Collider.

Subsequently, Gijs worked as a consultant in scientific software development for Alten Netherlands, primarily focusing on the development of a framework for environmental and hydrodynamical model couplings at Deltares.

Gijs joined the Netherlands eScience Center in 2016 and has mainly been involved in projects in weather, climate and hydrology. In these projects, he has applied large-scale parallel processing to climate data, worked on multi-scale atmospheric model couplings, and has been focused on improving model performance through optimization and GPU acceleration of these codes.

He has had an important role in the production of data for the next IPCC report with the EC-Earth climate model.