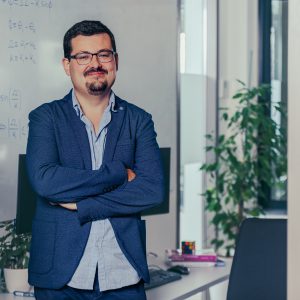 Pablo Rodríguez-Sánchez studied physics at Universidad Complutense de Madrid, Spain. He received his MSc diploma in 2012, with a thesis on Artificial Vision. As a consequence of that thesis, he worked for three years as an engineer at Indizen Optical Technologies, an engineering company focused on the design of lenses for human use.

In the autumn of 2015, he decided to move to The Netherlands in order to conduct a PhD in Applied Mathematics at Wageningen University. There he dealt with topics so varied as numerical modelling of plankton dynamics, visualization of dynamical systems, and the mathematics of synchronization in sleep-wake cycles. The resulting PhD thesis, Cycles and interactions: a mathematician among biologists, was defended in June 2020.

In 2004, Pablo began teaching as a personal science tutor. Later on, he was involved in the design and teaching of a variety of courses and master classes at various institutions, with topics ranging from calculus to thermodynamics and from ecology to software development. Since 2020, he became a certified Software Carpentries Instructor.

Since 2011, Pablo has been intensely involved in science communication. His training camp was, and still is, naukas.com, one of the largest science communication platforms in the Spanish language. With Naukas, he published tens of pieces about mathematics and physics. Additionally, he has given several popular science talks in theatres, with styles ranging from educational to stand-up comedy. See full list, including contributions in English, here.

For more information, visit his Medium profile and personal website.