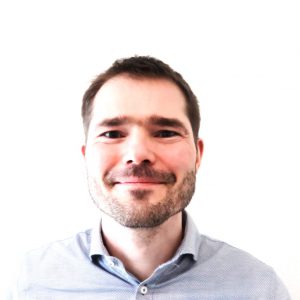 Mateusz obtained his master’s degree in Biotechnology, specializing in Biophysics, at the Jagiellonian University, Krakow, Poland. He used live-cell imaging techniques and fluorescence confocal microscopy to study the dynamics and structure of the cell nucleus. In 2010, he moved to Amsterdam, the Netherlands. He joined the RNA Biology & Applied Bioinformatics Unit at the University of Amsterdam and the Virtual Laboratory for Plant Breeding project as a Scientific Programmer.

In 2013, Mateusz joined the Netherlands eScience Center as a Research Software Engineer working on projects involving scientific programming, data analysis and visualisation in Python, R, Web applications in JavaScript, software containers and orchestration. Between 2017 and 2019, Mateusz has been working at the Dutch Techecenter for Life Sciences as a Scientific Community Manager. During this time, Mateusz participated in the ELIXIR project as a Deputy Training Coordinator ELIXIR-NL and the Software Development Best Practices Working Group co-lead.

Since 2015, Mateusz has been involved in the Carpentries community, first as an instructor, later contributor, mentor, executive council member and instructor trainer.

In September 2019, Mateusz joined the Netherlands eScience Center in the role of Community Officer, now Community Manager. Since then, Mateusz has been instrumental in setting up the Digital Skills Workshops portfolio at the Center and is now leading the training programme.