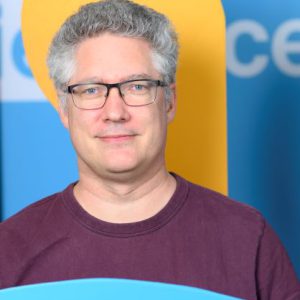 A long time ago, Stefan studied laboratory informatics and automatization. He worked in the food and pharmaceutical industry on developing and maintaining bioinformatics/cheminformatics applications for 10 years before joining the Netherlands eScience Center in 2011.

At the eScience Center, he started with a cheminformatics project called eMetabolomics, where he made the web interface and infrastructure for the MAGMa application. MAGMa helps identify which molecule is responsible for a certain mass spectra.

Next, he worked on an ecology project where he made visualizations of birds tracked using GPS. In the project, the Vogel het Uit! mobile application was made, a citizen science application to gather information about the environment where birds tracked to the app was a collaboration with a the University of Amsterdam, Nakko, SurfSARA and the eScience Center. The app won the Academische Jaarprijs of 2013.

After the ecology project, he started on an archaeological point cloud project to digitally reconstruct part of the Via Appia road near Rome in 3D. After working on some geospatial projects, he spent a bit of time on benchmarking a text mining pipeline and went back to life sciences and worked on a genome variation browser for a group of plant breeders.

Next was a cheminformatics project called 3D-e-Chem where a workflow system was used to connect nodes which perform different things like reading data, performing computations or visualizing results. Following was a cheminformatics project called 3D-e-Chem, in which he made over 30 workflow nodes which were used by the project partners in their workflows to integrate data, run novel algorithms, and visualize the results to study the interactions between proteins and small molecules that can bind to them.

In the eScience Center’s eWatercycle project, he is responsible for the notebook environment that is used by hydrologists to run their models and explore the results. A cooperation was started with Marin where he made a notebook environment in the cloud to analyze their ship sensor database and later build a web application which can run voyage simulations serverless.

He joined the generalization team in 2020 to help with wider adoption of software made in the eScience Center’s projects.

Besides projects, he also worked on multiple incarnations of what is now known as the Research Software Directory and worked on Xenon, a library that abstracts job schedulers and filesystems.